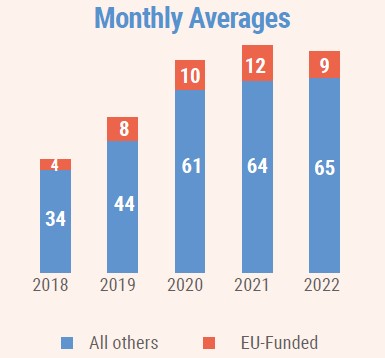 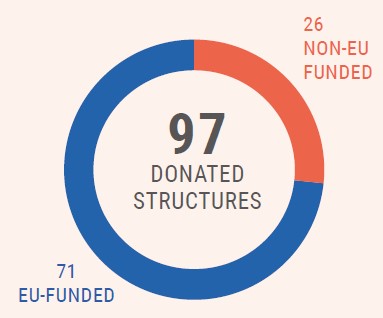 In July and August 2022, the Israeli authorities demolished, seized or forced people to demolish 202 Palestinian-owned structures across the West Bank, including East Jerusalem. Twenty-nine (29) of these had been provided as donor-funded humanitarian aid. As a result, 216 people, including 105 children, were displaced, and the livelihoods or access to services of over 1,200 others were affected. All but 14 of the structures were targeted for lacking building permits, which are nearly impossible for Palestinians to obtain.

Twelve (12) of the structures demolished or seized in July and August were in herding communities in Israeli-designated ‘firing zones.’ Nearly 30 per cent of Area C is designated as such, and the 38 Palestinian communities in these training areas are among the most vulnerable in the West Bank, with limited access to essential services and basic infrastructure. In the herding communities of Al Jiftlik Ash Shuneh and Fasayil, both in Jericho, the Israeli authorities demolished eight structures, six of which had been provided as humanitarian assistance in response to previous demolitions. Fourteen people were displaced and seven were otherwise affected. Additionally, in Al Abaidiya and Umm Qussa, both in southern Hebron, and in Khirbet ar Ras al Ahmar in Tubas, the Israeli authorities demolished a total of four structures. As a result, 23 people, including 17 children, were displaced.

In July and August, 27 structures were seized without warning in Area C, which prevented the ability of owners to object in advance. This represents a significant decrease in the use of this procedure compared with the monthly average of seized structures (35) during all of 2021.

Additionally, in six separate incidents in the Area C communities of Al Abaidiya, Umm Qussa and Al Jwaya (all in Hebron), and in As Sawiya and Huwwara (both in Nablus), the Israeli authorities demolished a total of nine structures based on Military Order 1797, which provides only a 96-hour notice and very limited grounds for legally challenging a demolition. This resulted in the displacement of six households, comprising 26 people, including ten children. A total of 210 Palestinian-owned structures have been demolished based on this order since it came into effect in July 2019.

Serious concerns remain for the tens of thousands of Palestinians who endure fear and insecurity due to outstanding demolition orders that can be executed at any time. June 2022 marked a record month for the issuance of demolition orders against donor-funded structures, with a total of 55 such structures placed at risk of demolition. In addition to the increase in demolition and stop-work orders against Palestinian-owned structures, there have been a noted rise in the seizure of vehicles, tractors, water tanks and other essential items for communities living in Area C.

During the reporting period, two schools were put at risk of demolition and the demolition of a third school was delayed through a court injunction. On 3 August, the Israeli Civil Administration issued a final demolition order against two rooms that are part of a school in Mantiqat Shi’b al Butum, south of Hebron. The school was built in 2015 through a donor-funded project and serves children from multiple communities. The affected rooms were funded and built by the community. On 10 August, an Israeli court sanctioned the immediate demolition of an donor-funded school in the herding community of Ein Samiya, northeast of Ramallah, affecting about 17 students, and jeopardizing the students’ right to education. On 21 August, the Israeli authorities issued final demolition orders against parts of another donor-funded school in Um Qussa (Hebron) located in an area designated as a ‘Firing zone’ for military training, and where Palestinian communities are at risk of forcible transfer. The school is one of the nine donor-funded structures to receive stop work or demolition orders during the reporting period.

During the first eight months of 2022, 49 per cent of the structures demolished in East Jerusalem were destroyed by their owners following the issuance of demolition orders, compared with 27 per cent in the previous five years. This is attributed to new Israeli legislation which limits the authority of Israeli courts to intervene and enables the Jerusalem Municipality to exert pressure on families to demolish their properties themselves. During two self-demolition incidents in Ras Al ‘Amud area in East Jerusalem, Israeli forces stationed outside the properties and reportedly threatened to jail or fine family members if they did not complete the demolition quickly.

Four homes were demolished on punitive grounds in Area B of the West Bank. On 26 July, Israeli forces raided Qarawat Bani Hassan (Salfit) and demolished two homes with multiple floors of families whose members were accused of killing a guard of an Israeli settlement in April 2022. On 8 August, Israeli forces raided Rummana (Jenin) and demolished two multistorey homes of families whose members are accused of killing three people and injuring three others in Israel in May 2022. During the former operation, three additional neighbouring homes sustained damage. Punitive demolitions are a form of collective punishment, prohibited under international law, as they target the families of a perpetrator, or alleged perpetrator and often trigger confrontations between Palestinian communities and Israeli forces, resulting in casualties.

Since the beginning of 2022, ten homes have been demolished on punitive grounds, compared with three in all of 2021 and seven in 2020.

More information is included in the PDF version of this report.

Interactive charts with data since 2009 are available here.

Published by I Can Handle the Truth

I am a journalist, editor, and activist for the human rights for Palestinians across the world. Long Live Palestine! View more posts